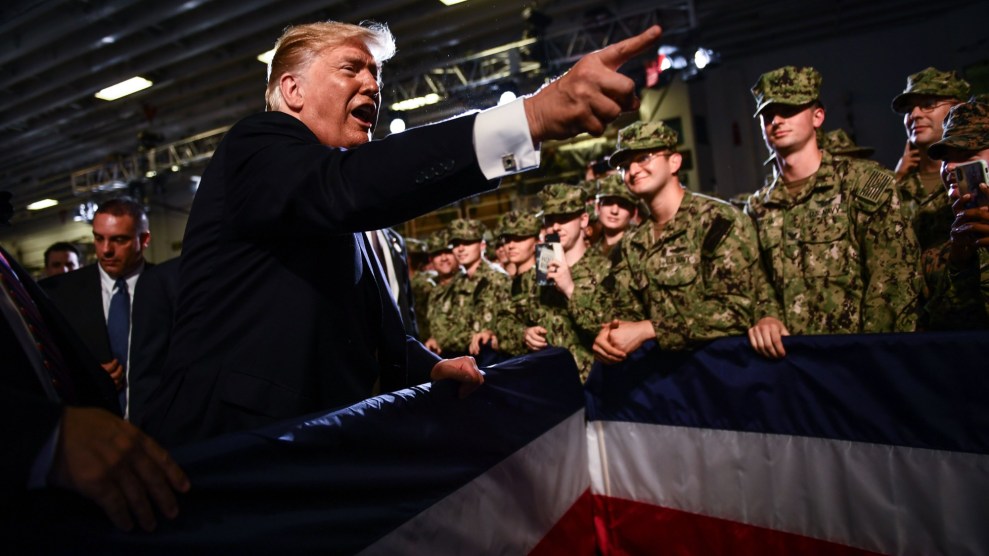 The House Armed Services Committee unanimously approved a draft defense policy bill early Thursday morning, setting up a clash not between Democrats and Republicans—who seem to mostly agree on the fundamentals of the legislation—but with Donald Trump over the naming of military bases after Confederate generals.

Before the House panel finished its all-day markup, Trump threatened to veto the final bill if it included a provision to rename bases. The amendment that drew Trump’s ire initially appeared in a Senate version of the bill, where it was introduced by Sen. Elizabeth Warren (D-Mass.) and won bipartisan support. The presence of a similar provision in the House bill all but ensures it will survive in the final version that reaches Trump’s desk. “The Confederate soldiers who betrayed the United States to fight for the Confederacy were fighting for the institution of slavery,” Warren said Monday on the Senate floor. “It is time to put the names of those leaders who fought and killed US soldiers in defense of a perverted version of America where they belong, as footnotes in our history books, not plastered on our nation’s most significant military installations.”

To Senate Republicans, this is all needless fluff from Trump. Would he really give Joe Biden the chance to run attack ads, weeks before the election, noting that Trump vetoed a pay raise for the troops? “The veto would take place sometime probably in November,” Senate Armed Services Committee Chair James Inhofe (R-Okla.) told Politico. “And we have a long, long time between now and November. So we’ll see.”

It’s not unusual to see Trump kickstart another culture war over a bunch of racist symbols, but in this case it’s especially strange because the defense policy bill is one place where he can usually claim victory. Last year, after House Democrats attempted to pass a progressive bill reining in his military authority and blunting his ability to fund a border wall, Trump took a victory lap upon defeating those measures. In a statement released after its passage in December, the White House applauded the bill for “rejecting progressive attempts to limit the President’s authorities as Commander in Chief.”

This year’s House bill was more of a conscious compromise, avoiding many of the battles over defense spending and war powers that defined last year’s drafting process. The overall defense spending figure—a subject of heated debate between Democrats and Republicans last year—increased to $741 billion without much of a fight, due to a deal brokered last year by congressional leaders. Progressives repeatedly tried to make an issue out of the overall spending figure, but never made much progress. Even the coronavirus pandemic, which neatly presented an opportunity to rethink traditional spending priorities, didn’t lead to any large-scale changes. An amendment introduced by Rep. Ro Khanna (D-Calif.), which would have taken $1 billion from a fund for the next generation of intercontinental ballistic missiles (ICBM) and put it toward pandemic preparedness, was roundly rejected in a 44–12 vote. (Northrop Grumman, the contractor working on the new missile program, has poured nearly $6 million into lobbying members of the Armed Services committees and other lawmakers who have ICBM bases in their states.)

House Armed Services Committee Chair Adam Smith (D-Wash.) supported Khanna’s unsuccessful amendment, but has been reluctant to relitigate last year’s fight, which led to the rare instance of a defense policy bill clearing the House on a party-line vote. Even with Democrats holding a large majority in the House, outside the progressive wing there seems to be little appetite to stop the inevitable ballooning of the Defense budget. In April, with Smith inclined toward a bipartisan bill, it seemed like the stage was set for a progressive backlash. Khanna hinted as much in a conference call with reporters that month. “The leadership is going to have to make a choice,” he said. “They’ll either pass a progressive NDAA or pass a bill with Republican votes.” Instead, the bill was sent to the House floor unanimously.

Some amendments are not likely to survive the eventual compromise process with the Senate. A thin majority supported Khanna’s push to end logistical support for Saudi Arabia’s war in Yemen, reviving a years-long fight by a bipartisan caucus in Congress to reduce American involvement in that catastrophic war. Other amendments, including a bipartisan one to block Trump’s plans to withdraw troops from Germany, will meet resistance from the White House and potentially be stripped out.

But the bill eventually passed by the Democratic House is sure to include the amendment requiring names of Confederate generals to be stripped from military bases. The Republican-controlled Senate Armed Services Committee has already adopted the measure, and, as Sen. Brian Schatz (D-Hawaii) pointed out on Twitter, 60 votes would be needed to reverse it on the Senate floor.

Trump, never one to forgo an opportunity to ignite a culture war, seems fixated on playing the dummy in this stupid, racist fight. A bill sure to please Republicans, anger progressives, and keep the national security establishment humming might falter all because Trump wants to keep a bunch of secessionist rebels’ names on some bases. Like the Confederacy, he doesn’t seem to know when the cause is lost.