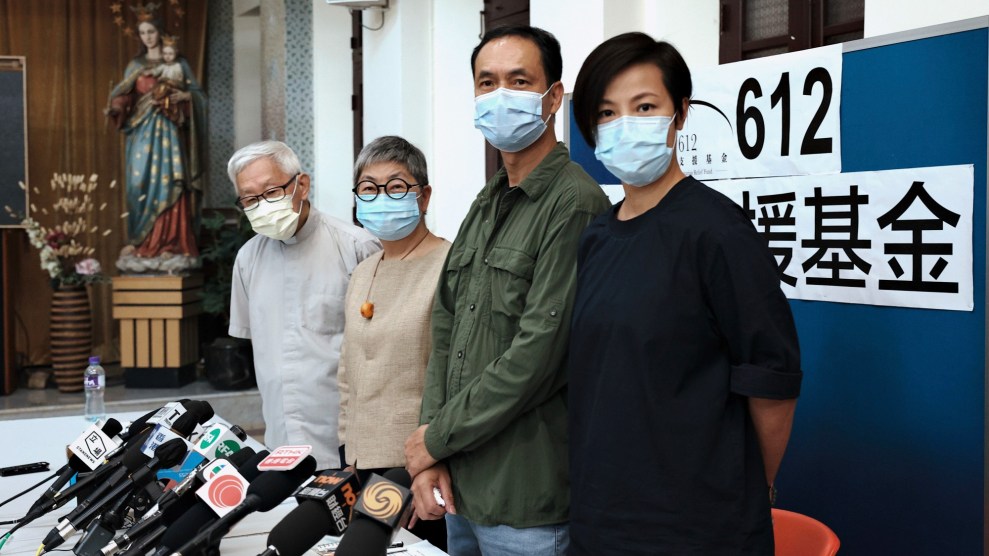 In the nearly two years since the Chinese government imposed a draconian “national security” law on Hong Kong, the authorities have rounded up dozens of journalists, pro-democracy politicians, and other activists. The point of the law is to instill fear among those who would challenge Beijing and, by that count, it has succeeded. Since its introduction, the Chinese government “has used the letter and spirit of the law to crush Hong Kong’s pro-democracy opposition with surprising ferocity,” the New York Times concluded last year.

Hardly anyone’s idea of a goon squad, the detainees are all prominent pro-democracy voices who, most recently, served as trustees of a relief fund that provided financial aid, counseling, and legal advice to Hong Kong protesters. The fund stopped operating in October, making it especially odd that the Chinese government went after its trustees months after the fact. “By any rational measure, the threat—if the government considers food assistance and legal fees a threat—ended with the closure of the fund,” wrote Mark Simon, former deputy to Hong Kong pro-democracy publisher Jimmy Lai, in a Washington Post op-ed.

The arrests seemed to serve no rational purpose beyond sparking fear and confusion.

The arrests seemed to serve no rational purpose beyond sparking fear and confusion—and in Xi Jinping’s China, that often is the purpose. Zen’s arrest immediately sparked a diplomatic crisis with the Catholic Church, which only four years ago signed an agreement—against Zen’s wishes—to give Beijing more oversight over the bishops selected in China. The deal renews every two years, making it an especially odd time for the Chinese government to pick a fight with the Vatican.

“Cardinal Zen is a symbol of resistance to Communist China,” Massimo Faggioli, a professor of theology at Villanova University who studies the Vatican. “This is bad news not just for Catholics in Hong Kong, but for Hong Kong generally. It may be a symbol of what’s coming with this new government.”

Roughly 5 percent of Hong Kong residents are Catholic, but strangely enough, their number includes some of the city’s most recognizable figures. Lee, the new chief executive, is Catholic, as was his embattled predecessor Carrie Lam. Lai, the famed Hong Kong publisher, and former legislator Martin Lee, who spearheaded the pro-democracy movement in Hong Kong since before its return to Chinese control in 1997, are also Catholic. “Their commitment to rights and social justice is very much a function of their faith,” Sophie Richardson, the China director at Human Rights Watch, told me.

Among these icons of the pro-democracy movement, Zen is revered as a uniquely courageous activist, equally willing to speak out against the Chinese government and the Catholic Church. He served as bishop of Hong Kong until 2009, remaining firmly on the side of the pro-democracy movement. When Lai, Lee, and fellow Catholic Agnes Chow were arrested under the national security law, Zen said they were “simply putting into practice the social teaching of the Church.”

Zen has also not been shy about challenging Pope Francis. In December 2019, he published an op-ed sharply criticizing the Church’s approach toward China. “The line followed by the Vatican in recent years when dealing with the threatening China giant has been appeasement at any cost,” he wrote. Under Francis’ leadership, the Vatican has offered concessions to Xi’s government to ensure Chinese Catholics can worship free of harassment from the state.

In recent years, the Vatican’s approach with “the threatening China giant has been appeasement at any cost,” Zen wrote.

Religious worship in China is tightly controlled—as Uyghurs and Tibetans well know—leading to a bizarre arrangement where some Chinese would participate in a state-run church, unaligned with the wider Catholic Church, or be involved with an “underground” church that pledged fealty to the Vatican. For the price of staying loyal to the pope, many underground church leaders spent decades in prison.

Francis’ agreement with China was intended to create security for Chinese Catholics at the cost of giving the government veto power over bishop selections. Faggioli said it is not unusual for national governments to demand some degree of input over the choice of Catholic bishops, “but in public now, the perception is that the Chinese government is not respecting the terms or the spirit of the agreement.”

“In the last two years,” Faggioli said, “the situation has deteriorated for Catholics in China and Hong Kong.” The space for any kind of free expression in Hong Kong has been virtually extinguished.