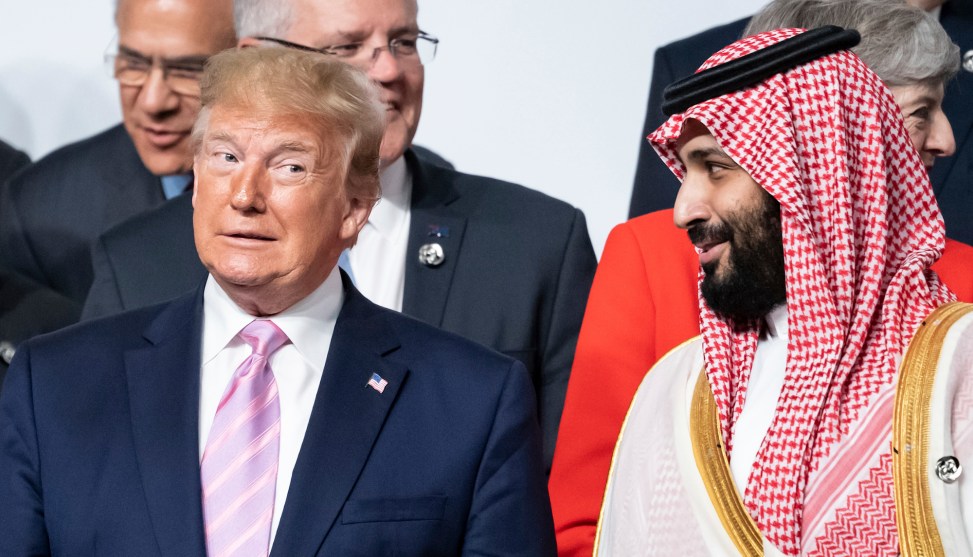 A group of family members of 9/11 victims is asking former President Donald Trump to cancel events being hosted at his golf clubs by a controversial Saudi Arabian-backed golf competition. Trump hasn’t responded directly to the group. Instead, on Monday, he publicly urged more golfers to get involved with the LIV Golf league, which is heavily financed by the kingdom’s sovereign wealth fund.

9/11 Justice, an organization of 9/11 survivors and family members, sent a letter to Trump on Sunday, pointing to Trump’s previous comments pinning blame for the terrorist attacks on Saudi Arabia and saying that it causes them anguish to know that Trump will be paid by LIV Golf to host two tournaments, including one later this month at Bedminster, the northern New Jersey club where Trump spends much of his summer.

“It is incomprehensible to us that a former President of the United States would cast our loved ones aside for personal financial gain.”

“The 9/11 mass murder of our spouses, parents, children, and siblings left us with a lifetime of grief and pain. That pain fuels our ongoing fight to hold Saudi Arabia accountable for its role in the attacks and what they have taken from each of us,” the letter reads. “It is incomprehensible to us that a former President of the United States would cast our loved ones aside for personal financial gain.”

The Trump Organization did not respond to a request for comment, and Trump has not addressed 9/11 Justice’s concerns. But on Monday, he took to his social media startup to encourage more professional golfers to join the new league, which is embroiled in an increasingly bitter dispute with the more established PGA Tour.

“All of those golfers that remain ‘loyal’ to the very disloyal PGA, in all of its different forms, will pay a big price when the inevitable MERGER with LIV comes, and you get nothing but a big ‘thank you’ from PGA officials who are making Millions of Dollars a year,” Trump wrote. “If you don’t take the money now, you will get nothing after the merger takes place, and only say how smart the original signees were.”

Explicitly set up to compete with the PGA Tour, LIV Golf has spent lavishly to lure top names from the PGA and has put up gigantic prize purses at each of its tournaments. Tiger Woods was reportedly offered close to a billion dollars to switch his allegiance but declined to do so. Most of the PGA’s other big names have similarly rejected LIV’s overtures, but some, including Phil Mickelson, have joined up. The PGA Tour has fought back, banning players who participate in LIV from competing in regular tour events. The divide has turned acrimonious, with Woods saying last week that he felt the players who left had “turned their back” on their roots. Earlier this week, it was revealed that the Department of Justice is investigating the PGA for potential anti-trust violations over its response to LIV.

Trump is a golf fanatic—those who golf with him say he’s fairly good (though they have claimed that he also cheats outlandishly). One of his greatest desires in life is, apparently, to see a major golf tournament come to one of his golf properties. But following his entrance into politics—when he accused Mexicans of being rapists—the PGA Tour began drawing away from him. And after the January 6 insurrection, those ties were cut with finality, as the PGA Championship was pulled from his Bedminster club and golf’s governing body in the United Kingdom made it clear that the British Open will not be visiting either of Trump’s two Scottish resorts.

The LIV tournaments will offer Trump some cold, hard cash.

The LIV Golf league, meanwhile, has generated almost nothing but bad headlines since its unveiling last year. Shortly after its creation, for instance, Mickelson admitted to a journalist that the new league’s backers were problematic—but he suggested he was willing to live with that.

“We know they killed [Washington Post journalist Jamal] Khashoggi and have a horrible record on human rights. They execute people over there for being gay,” Mickelson told an interviewer. “Knowing all of this, why would I even consider it? Because this is a once-in-a-lifetime opportunity to reshape how the PGA Tour operates.”

Since then, nearly every publicity event for the league has turned ugly, as reporters have repeatedly pressed golfers on their participation. In June, an AP reporter was removed from a press conference by security after asking questions about the league’s finances. LIV golfers were booed at the recent British Open and disinvited from a traditional pre-tournament dinner.

Amid these controversies, LIV has also ridden to Trump’s rescue, agreeing to host a tournament July 29-31 at Bedminster. Its season-ending tournament will be held at Trump’s Doral resort outside of Miami. The LIV tournaments have none of the prestige that a PGA Championship or a British Open would bring, but they will offer Trump some cold, hard cash. It’s not clear how much Trump will be paid to host those tournaments—one golf industry expert told Mother Jones it would likely be several million dollars for Bedminster and would also provide valuable publicity. Trump may need that money. A number of his golf clubs have been money-losing propositions in recent years, and some, like his Scottish resorts, have never made money.

As we noted last year, Trump has a long history of doing business with the Saudis:

In 2015, he bragged during a campaign appearance about his business dealings with the Saudis. “Saudi Arabia, I get along with all of them,” Trump said. “They buy apartments from me. They spend $40 million, $50 million. Am I supposed to dislike them? I like them very much.” And shortly before his run, Trump aggressively pursued a deal to build hotels in Jeddah, the gateway city to Islam’s holiest cities of Mecca and Medina—a deal which likely needed the blessing of senior members of the Saudi royal family to even be considered.

9/11 Justice president Brett Eagleson, whose father John Bruce Eagleson died on 9/11 when the World Trade Center’s south tower collapsed after being hit by a hijacked jet, says his group was hoping Trump would be open to their arguments. Eagleson points out that in 2016, while running for president, Trump voiced the opinion that the 9/11 attacks were abetted by the Saudi government and said that if he had been president, his policies would have kept the terrorists out of the country.

The 9/11 Justice letter to Trump quotes comments the former president made on Fox & Friends during his first campaign. “Who blew up the World Trade Center?” Trump said at the time. “It wasn’t the Iraqis—it was Saudi. Take a look at Saudi Arabia. Open the documents. We ought to get Bush or somebody to have the documents opened because frankly if you open the documents, I think you are going to see it was Saudi Arabia…Those people would have not been in the country had my policies been intact.”

“He chose to meet with us, he chose to say he would help us, and he chose to protect the Saudis from the public spotlight, and it’s just totally egregious.”

Fifteen of the 19 terrorists who perpetrated the attacks, which killed more than 3,000 Americans, were Saudi citizens. Questions swirled about what role Saudi intelligence might have played in supporting the attackers. For years, survivors and family members of victims had lobbied the federal government, unsuccessfully, to release a cache of classified documents compiled by investigators that were thought to implicate the Saudi government in the attack—the documents Trump was referring to in his 2016 interview.

Eagleson says that in 2019 he and several other survivors and family members met with Trump at the White House to ask for the release of the documents. In person, Trump agreed to help their cause. But the next day, then-Attorney General Bill Barr moved to block the release.

“He chose to meet with us, he chose to say he would help us, and he chose to protect the Saudis from the public spotlight, and it’s just totally egregious,” Eagleson says.

The Saudi Arabian government has denied any responsibility for the attacks, and the 9/11 Commission, set up to investigate the tragedy, was unable to conclusively link Saudi government officials to the hijackers. The documents sought by Eagleson in that meeting with Trump were eventually released in September 2021 by the Biden administration. Most of those documents were heavily redacted, and they don’t offer conclusive proof one way or the other. But they a do show that the US government investigated the matter and that there was a closer relationship between Saudi officials and some of the hijackers than previously known.

Eagleson says these revelations reinforced the argument that the Saudi government should be held responsible for the 9/11 attacks; he and other family members and victims are waging an ongoing lawsuit against the kingdom. The LIV Tour is an attempt by Saudi Arabia to launder its reputation away from its misdeeds and into something more benign and entertaining, Eagleson says.

“They’re trying to distract America from all the atrocities that they commit all over the world,” he says. “The carpet bombing of Yemen, oppressing women, murdering homosexuals, any number of things, starting with these FBI documents.”

Eagleson says his organization, which formally incorporated last month, is non-partisan in its aims. He notes that while the group didn’t oppose President Joe Biden’s recent trip to meet with Saudi leader Prince Mohammed Bin Salman (because it’s still necessary to engage with the kingdom politically, Eagleson says), he and other family members and survivors did criticize Biden for initially continuing the policy of not releasing the investigative file that Trump had promised to make public. Biden was uninvited from last year’s 9/11 memorial service until he released the documents, Eagleson says.

Eagleson adds that even if Trump doesn’t cancel the LIV tournaments at his courses, he believes 9/11 Justice is raising awareness. The group is now planning a protest outside of Bedminster on July 29; it protested LIV’s tournament in Portland earlier this month. And, Eagleson says, he and his allies will continue trying to raise the issue at future events.