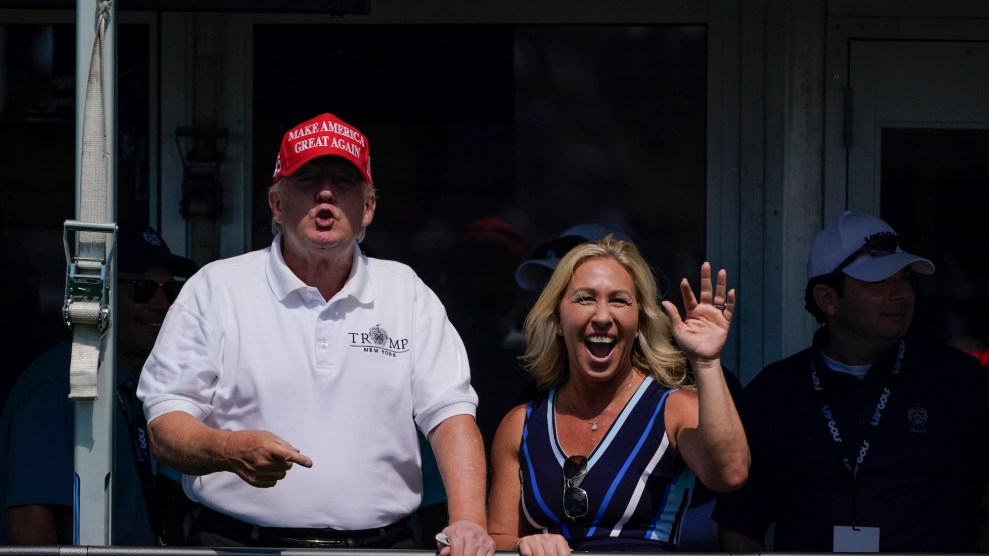 Donald Trump’s big plan to take his struggling media start-up public is in serious jeopardy. And if TruthSocial’s luck doesn’t turn around quickly, it could take a big chunk out of the pocketbook of one of Trump’s closest political allies: Rep. Marjorie Taylor Greene.

Last October, Trump unveiled TruthSocial, along with an intricate plan to raise billions of dollars to launch a media empire that could compete with the likes of Twitter, Facebook, and Netflix. Instead of asking banks or venture capitalists for the money—Trump’s options were severely limited due to his bad reputation with lenders and PR toxicity following the January 6 insurrection—he would try to take his company public. The idea was to merge the new Trump Media & Technology Group with what is known as a special purpose acquisition company, or SPAC. It’s a shell corporation that has already gone public, but which is a completely blank slate—it has no business, no purpose, and only the barest of staffs or budgets. Its only goal is to find a private company, like TMTG, to merge with.

When this kind of merger happens, it can help small companies that can’t, or don’t want to, deal with big Wall Street funders sell shares and raise big bucks. But there are also a lot of potential pitfalls, and the company that Trump chose to partner with, Digital World Acquisition Corp, has run into many of them. After Trump’s big announcement last year, DWAC’s shares shot up from around $10 to as high as $175 (just for a moment), and the early investors stood to make fortunes if the merger happened. But it hasn’t, in large part because DWAC is under investigation by the Securities and Exchange Commission.

That’s a big problem because, according to DWAC’s own internal corporate rules, it has to complete a merger by Sept. 8 of this year—Thursday—or else put itself out of business and refund investors $10 per share. DWAC’s founders organized a special shareholder meeting for Tuesday this week, at which they asked all shareholders to vote in favor of extending the deadline another year. However, early on Tuesday, even before the meeting started, Reuters reported that company insiders were saying they didn’t think they would get approval. The stock, already substantially down from its high points, went spiraling.

If DWAC does eventually shutter its doors and never merges with Trump’s company, a lot of investors will get hurt. The best they could hope for is $10 a share, when many paid many multiples of that. And according to DWAC executives, the majority of the shareholders are retail investors, ie. regular people who bought shares through platforms like TD Ameritrade or Robinhood. (In fact, according to Reuters, that’s one of the reasons it has been so hard to round up enough yes votes for the plan to extend the deadline.)

It’s not clear how much DWAC stock, if any, Trump might own. But in messages posted on TruthSocial over the weekend, he seemed not at all concerned about the possibility that the merger with DWAC wouldn’t happen. In fact, he took it as an opportunity to brag about his wealth.

“TRUTH is doing really well. It has truly become our MAGA VOICE, but also a voice for the RINOs and Radical Left Lunatics,” Trump wrote. “SEC trying to hurt company doing financing (SPAC). Who knows? In any event, I don’t need financing, ‘I’m really rich!’ Private company anyone???”

Though not entirely coherent, Trump appears to be claiming he could finance TruthSocial’s development out of his own pocket, which is almost certainly not true. If the merger went through, it would instantly give TMTG access to $1.2 billion that DWAC has lined up already—that would be a good start, but still a paltry sum when you consider that Twitter, which has more than 230 million users (compared to perhaps 2 million for TruthSocial), still isn’t profitable and last quarter alone lost $270 million. Also, in late August, Fox Business reported that TruthSocial hasn’t been paying at least one vendor, suggesting the company is short on financing while it awaits the merger.

We do know, however, that Greene—the bombastic congresswoman from Georgia—will take a big hit if DWAC is liquidated. Greene and Indiana GOP Rep. Larry Buchson both purchased DWAC shares last fall. Buchson purchased a handful, but Greene bought quite a few—and at close to the highpoint. According to a periodic transaction report filed by Greene, she bought between $15,001 and $50,000 worth of DWAC stock on Oct. 22, 2021. Congressional stock tracking website CapitolTrades.com reports she bought her shares for $94.20 (which was the stock’s closing price that day), which would imply that Greene owns anywhere from 159.2 shares to 530 shares.

If it’s the latter, based on how low DWAC’s stock was trading on Wednesday afternoon, $50,000 worth of shares Greene bought last year would now be worth as little as $12,000. And if DWAC were to dissolve itself and pay investors just $10 a share, her loss could be as high as $44,700. Even if Greene had purchased the minimum amount possible within the range she reported, her shares today would be worth less than $3,700—a loss of more than $11,000.

Greene’s office did not respond to questions about her potential loss or whether she still owns the stock. (She would have had to report the sale if she unloaded it.) Bucshon’s office also did not reply, but his losses would likely be much lower, given that he purchased less than $5,000 worth of shares at a lower price than Greene.