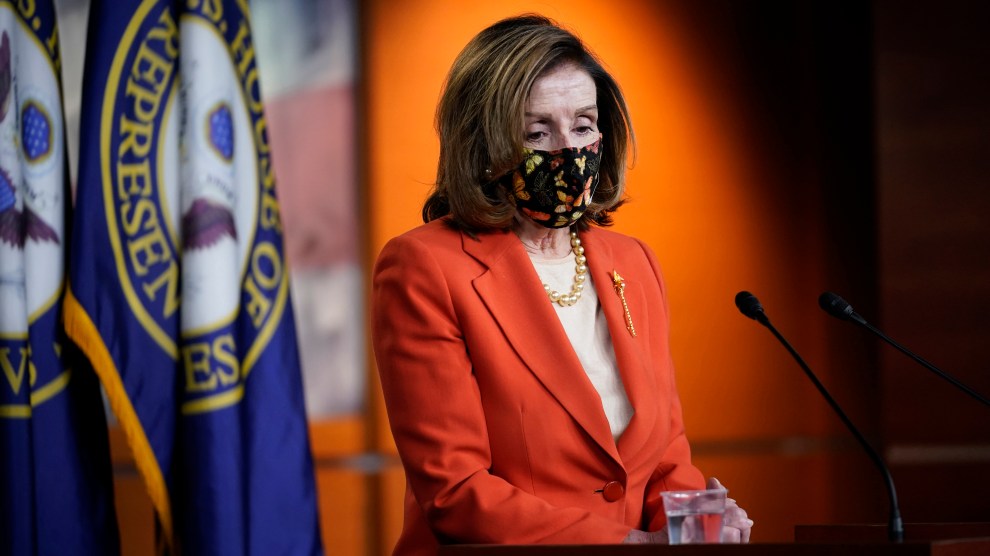 The suspect who allegedly targeted House Speaker Nancy Pelosi and brutally beat her husband Paul with a hammer after breaking into their San Francisco home late last week was charged in federal court on Monday with assault and attempted kidnapping. A trail of recent social media activity indicates that 42-year-old David DePape was fixated on a toxic brew of far-right conspiracy theories and may have been delusional and suicidal. On Monday, evidence emerged suggesting that DePape was motivated at least in part by demagoguery espoused at great length by Donald Trump and his allies in the Republican Party.

According to an FBI criminal complaint, DePape told police investigators that he’d intended to kidnap Nancy Pelosi, who was in Washington at the time, and to “break her kneecaps” while interrogating her. In an echo of the January 6 insurrection, he had zip ties with him for his planned hostage-taking and assault. DePape further stated that he regarded Pelosi as the “leader of the pack” of lies told by the Democratic Party, and that he saw himself as similar to Americans during the Revolutionary War, “fighting against tyranny without the option of surrender.”

Wherever DePape may fall on the continuum of deeply aggrieved to mentally ill, his case is Exhibit A for the escalating dangers of stochastic terrorism—a method of rhetorical incitement that Trump brazenly ushered into the American presidency and successfully spread throughout the GOP. By continually vilifying alleged political enemies while in office, Trump emboldened far-right extremists, giving rise to white-supremacist violence and the January 6 insurrection.

There is no both sides-ing this problem, despite assertions to that effect by Fox News pundits and Republican officials in the days since the harrowing assault at the Pelosi’s home. While examples of politically motivated threats and attacks have also emerged from the left in recent years, including the 2017 mass shooting at a congressional baseball practice and a recent plot to assassinate Supreme Court Justice Brett Kavanaugh, the collective behavior by leaders of the Trump-dominated Republican Party has zero equivalence across the aisle.

At least a dozen participants in the January 6 assault on Congress had voiced graphic death threats against Nancy Pelosi.

The danger doesn’t just arise from the participation of Republican politicians who draw support through demagoguery, but also from the party’s broader complicity through inaction. The lack of any real effort by most Republican leaders to vigorously reject the increasingly dark incitement from Trump and his allies is feeding into a growing appetite for political violence among Americans—and above all among partisan Republicans, as I reported recently.

That forebodes more bloodshed. Throughout 2022, leaders in threat assessment have told me that plots and attacks fueled by Trump’s incitement and MAGA extremism are by far the driving concern when it comes to political violence, and that those factors mark a growing range of threat investigations. The attack at the Pelosi’s home was “sadly predictable,” one of them told me Friday.

It would be difficult to overstate how big of a target Trump and GOP leaders have put on Nancy Pelosi over the years. They further escalated their demonization of her beginning with Trump’s first impeachment. The president blasted her as “Crazy Nancy” and denounced her San Francisco district as “filthy” and “dirty”; he accused her of waging “open war on democracy” and later called her “a sick woman,” adding, “She’s got a lot of problems, a lot of mental problems.” Violence research from behavioral psychologists shows that efforts by public figures to stoke contempt and disgust for their adversaries increases the likelihood of extremist followers randomly committing violent attacks.

The results could be seen to a grim extent on January 6, 2021. According to case data collected by Mother Jones from the hundreds of Justice Department prosecutions related to January 6, at least a dozen participants in the assault on Congress had voiced graphic death threats against Nancy Pelosi.

Guy Reffitt, a far-right militia member from Texas who was convicted of multiple felonies for his actions at the Capitol, had threatened to forcibly remove members of Congress including the House Speaker: “I don’t care if Pelosi’s head is hitting every step while I drag her by her ankles—she’s coming out.” Cleveland Meredith, another participant who traveled armed to the nation’s capital on January 6, vowed to put “a bullet” in Pelosi’s head on “live TV” and referred to her as “Dead Bitch Walking,” according to court documents. Disturbing video recorded from inside the siege of Congress and posted on social media showed one participant picking up a courtesy phone and sneering: “Can I speak with Pelosi? Yeah, we’re coming bitch.” Other defendants talked of “Crazy Nancy” being “torn into little pieces.”

DePape, according to multiple news reports, demanded to know “Where is Nancy?” after he broke into the Pelosi’s home, echoing other chilling footage from inside the Capitol on January 6.

Republicans have continued to vilify Pelosi and her husband tastelessly in the wake of Friday’s attack. Virginia Gov. Glen Youngkin offered a throwaway rejection of the violence against Paul Pelosi and then mocked the House Speaker: “We’re going to send her back to be with him in California,” he said at a campaign rally.  That was tame compared with other GOP responses. House Minority Leader Kevin McCarthy was slow to make any public statement about the attack; his subsequently tepid comments got into the specious both-sides framing of the issue.

Trump himself was active on his Truth Social platform on Friday and Saturday but remained silent for two days about the attack on the House Speaker and her husband. Then, in a broadcast interview on Sunday, he depicted the violence as part of a broad trend of rising crime in Democrat-led cities. “With Paul Pelosi, that’s a terrible thing, with all of them it’s a terrible thing,” Trump told Americano Media, a conservative Spanish language outlet. “Look at what’s happened to San Francisco generally. Look at what’s happening in Chicago. It was far worse than Afghanistan.”

The prospect of further political violence will stay heightened so long as America’s leaders—especially Republicans—fail to confront the incitement head on. Leading threat-assessment and extremism expert Philip Saragoza told me recently that anti-violence messaging from political leaders can be effective, but remains conspicuously absent. And as national security expert Juliette Kayyem observed around the first anniversary of the January 6 insurrection, a burgeoning domestic extremism movement must be dismantled not only from the bottom up but also at the very top.

To date, there is almost no sign of that happening in the Republican Party.