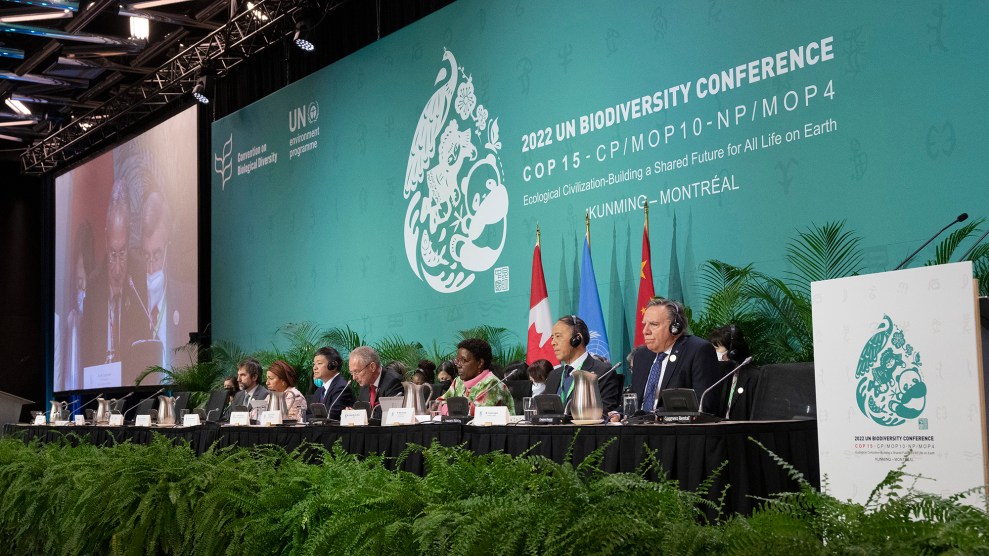 The head table at the COP15 biodiversity conference in Montreal on December 15.Ryan Remiorz/AP

Only two countries in the world have not joined the UN Convention on Biological Diversity: the Vatican and the US. Few have missed the Holy See, but the US not joining the CBD 30 years ago has been described as the “major holdout” among countries looking to support the convention’s goals.

In Montreal, where negotiations for this decade’s UN biodiversity targets are entering their frantic final stages, the absence of the US political machine is noticeable, changing the power dynamics in talks between the remaining 196 countries.

The EU is the main player from the global north and, as a result, weathers much of the criticism, accusations of hypocrisy and demands for money that the US is accustomed to getting in climate talks.

China holds the presidency of Cop15, the first time it has led on a major UN environment deal. A month ago, at Cop27, the US climate envoy, John Kerry, striding around the blue zone in Sharm El-Sheikh was ever-present before he caught Covid-19, and his face-offs with his Chinese counterpart, Xie Zhenhua, were always noteworthy. The US pavilion was a focal point for announcements, and the country’s scientists, campaigners and policymakers were important voices on the climate. All that is missing in Canada.

Scientists and environmentalists have long urged the US to join the biodiversity convention, given the country’s extensive involvement in designing the UN treaty and natural landscapes that include the archipelago of Hawaii, the temperate rainforests of Alaska, and the coral reefs and swamps of Florida, whose protection inspires bipartisan pride.

Bill Clinton signed the CBD on the US’s behalf in 1993, but the Senate refused to ratify it. The Guardian columnist George Monbiot has criticized the US for not being a party to the convention, saying it provides other countries with a permanent excuse to participate in name only. But it is not expected to join any time soon, as international treaties need to be ratified by a two-thirds majority in the Senate.

“The biodiversity crisis needs the same amount of face-time here in the US that climate gets given its severity.”

In a bid to show its commitment to nature, the US recently created a special biodiversity envoy, Monica Medina, the assistant secretary of state for oceans and international environmental and scientific affairs, to represent the US in Montreal (as an observer, not a party to the CBD), which is considered a sign the Biden administration takes the issue seriously. “I hope someday we’ll be a member of the CBD Cop but in the meantime we are being as constructive as we can be…it’s not stopping us from making contributions,” Medina told journalists.

The main issue the US has been outspoken about is the headline target of 30×30, protecting 30 percent of the land and oceans by 2030, which it is pushing domestically as part of its America the Beautiful initiative. “We are very much a member of the community on this planet that cares about the 30×30 framework. We have made this commitment domestically as well as globally,” Medina told delegates at Cop15. Campaign posters around the conference center promoting 30×30 are sponsored by the US-based Wyss Foundation.

In the first week of Cop15, the Canadian prime minister, Justin Trudeau, urged the “big five” countries—Russia, Canada, China, the US and Brazil—to adopt the 30×30 target to make it as effective as possible. He said that despite the US not being party to talks, “they’re very much present and being helpful in all the ways they can. But they’re an interesting asterisk.”

In terms of nature finance, the US is a major donor. It pledged $600 million to the Global Environment Facility, the main UN fund for climate and biodiversity, over the next four years. USAid funding for biodiversity is growing, with $385 million used for biodiversity funding in 2022. This is an $80 million increase on the previous year. “We are one of the largest funders of biodiversity protection in the world,” said Medina.

The US agenda on other targets in the CBD—which range from invasive species use to the commercialization of biodiversity—is less clear. Medina told journalists it was too soon to get businesses to make mandatory nature disclosures or say anything about pesticides, which are both draft targets in the final text. But she spoke positively about implementation and learning from Indigenous knowledge, and is committed to pushing for “nature positive” action.

Before the 1992 Earth Summit, the US was initially enthusiastic about creating an international treaty on nature, and the country was important in shaping the CBD. But the Senate refused to ratify it because of concerns about interference with the private sector, the breaching of intellectual property rights, the creation of more environmental regulation, and the redistribution of US wealth overseas. Stewart Patrick, director of international institutions and global governance at the Council on Foreign Relations, told Vox that conservative nationalists in the US had a deep mistrust for international agreements, which they viewed “as efforts by the United Nations and foreign governments to impose constraints on US constitutional independence.”

“The US is looking to play the role of influencer with their special envoy for biodiversity,” said Dr Lindsay Rosa of the activist organization Defenders of Wildlife. She said the US was pushing for the agreements reached in the Global Biodiversity Framework (GBF), the key text to come out of these talks, to be translated into a national biodiversity strategy, which would frame the nature crisis as a national priority.

Worldwide, 193 other countries have developed forms of a national biodiversity strategy. “While we aren’t party to it, we can still be guided by the GBF,” she said.

The US has paved the way on some nature legislation, including the 1973 Endangered Species Act, as well as creation of its national parks. The Recovering America’s Wildlife Act is currently making its way through Congress with bipartisan support and supporters are hopeful it will soon become law.

But despite talk of nature-based solutions, a lot of the focus was still on climate, rather than biodiversity, Rosa said. “The biodiversity crisis needs the same amount of face-time here in the US that climate gets given its severity. The two crises are inextricably linked, but climate is still just one of the major drivers of biodiversity loss,” she says.

Rosa believes it is important to raise the profile of biodiversity because some climate efforts can have perverse consequences. She said: “The Biden administration has pushed for offshore energy, wind, which doesn’t have to undercut biodiversity, but without careful planning, it could.”

Oscar Soria, campaign director of the activist organization Avaaz, said the US was pulling strings behind closed doors at the conference, a “classic but hugely outdated diplomatic strategy.”

Signing the convention would be a proper platform for the US to display its ambition on nature, he added. But there is no sign of the US joining anytime soon.