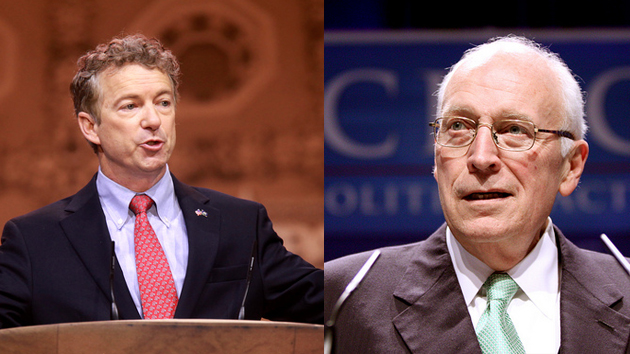 This past weekend, former Vice President Dick Cheney made yet another media appearance to denounce President Barack Obama. But Cheney also used the opportunity to continue his feud with Sen. Rand Paul (R-Kent.), who is mulling a bid for the 2016 GOP presidential nomination. On the friendly turf of Fox News Sunday, Cheney was asked about Paul’s 2009 damning accusation—reported last month by Mother Jones—that Cheney used the 9/11 attacks as an excuse for the Iraq war so that Halliburton, the military contractor Cheney once led, would reap a large profit.

Well, before I ever took the job as vice president, I totally severed all my ties with Halliburton, at considerable financial cost. I had no relationship at all with the company throughout the time I was vice president. I didn’t even talk to them. We kept a totally arm’s length relationship. So he obviously is not familiar with the facts.

Paul’s statement was harsh; he essentially had claimed that Cheney had betrayed the nation, exploiting a national horror and causing widespread death and destruction (including the deaths of thousands of Americans) to enrich his corporate cronies. When questioned by ABC News’ Jon Karl about his Cheney comment, Paul insisted, “I’m not questioning Dick Cheney’s motives.” But that’s precisely what Paul had done. And Paul had accomplished what not many could do: he evoked sympathy for the former vice president, who had led the Bush administration’s campaign to rally public support for the Iraq war with false claims about weapons of mass destruction and Saddam Hussein’s ties to al Qaeda.

It’s been easy for Cheney and his defenders to dismiss Paul’s over-the-top, conspiracy-theory-like assertion. But on Fox News, the ex-veep, too, went too far. He maintained that he had no financial ties with Halliburton while he was George W. Bush’s number-two and made a personal sacrifice by trading his CEO badge for a White House job. But that’s not entirely accurate.

As Politifact.com noted a few years ago, when Cheney became vice president, he pocketed a $34 million payout from Halliburton. In fact, because he probably sold stock options at an opportune time, he profited enormously because the stock price was at a high:

It’s not clear when Cheney sold his stock options, but it likely was within weeks of his being named to the ticket — a period when Halliburton shares hit their 2000 peak, in the low-to-mid $50 range. By November 30, 2000, the stock had fallen to $33 a share. If he’d waited until then to sell, his payday would have been one-third lower, or roughly $14 million rather than $22 million.

Moreover, when Cheney was veep, he continued to receive deferred payments from Halliburton. In 2004, the New York Times reported, “Mr. Cheney’s financial disclosure statements from 2001, 2002 and 2003 show that since becoming vice president-elect, he has received $1,997,525 from the company: $1,451,398 in a bonus deferred from 1999, the rest in deferred salary.” And at that time, Cheney still held some stock options in the company.

As vice president, Cheney repeatedly contended he had no continuing relationship with Halliburton. In 2003, he declared, “I’ve severed all my ties with the company, gotten rid of all my financial interest. I have no financial interest in Halliburton of any kind and haven’t had, now, for over three years.” But a report issued that year by the Congressional Research Service undermined Cheney’s claim. It found that if a public official retained unexercised stock options and collected deferred salary—as Cheney did then—the official had “retained ties” to the company.

So when Cheney now says that he had nothing to do with Halliburton while he was vice-president, he is contradicted by the Congressional Research Service. Maybe he wasn’t in contact with his old pals at the firm, but he continued to bank millions of dollars from the company as it obtained Iraq-related contracts from the US government.

In this ongoing scuffle pitting a GOP establishment heavy (who’s a hawk) against a possible insurgent Republican presidential candidate (who’s an intervention skeptic), both are wrong. When Paul assailed Cheney, he went too far and joined the ranks of the tin-foil-hats crowd—and then he tried to claim he had not said what he said. In defending himself, Cheney misrepresented his financial relationship with Halliburton. This mud-wrestling match has yet to produce a winner, but it is showing that each participant has a problem with accuracy.