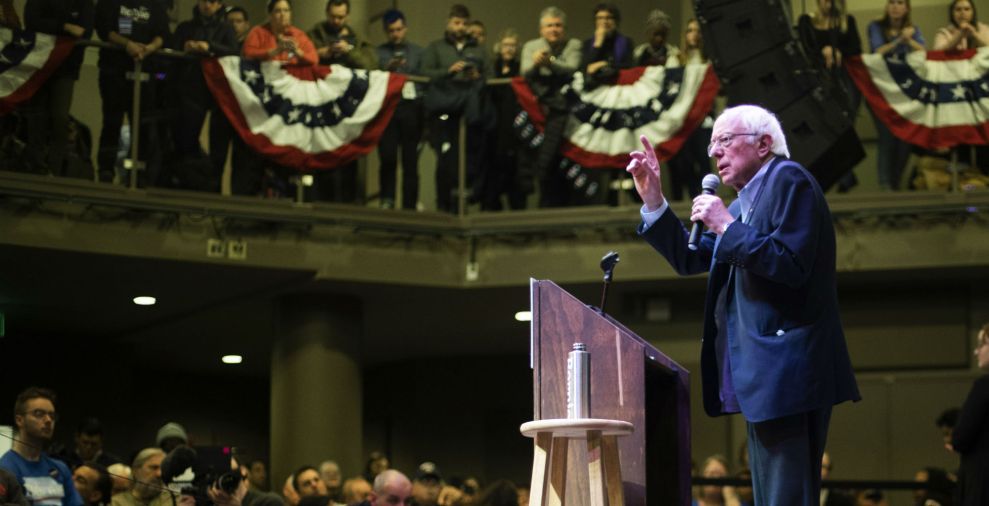 Bernie Sanders’ allies railed against the DNC and corporate Democrats out to get him, and Vampire Weekend was in Iowa to open up for the senator.

That was what I saw reporting from the state four years ago as caucus-goers faced choosing between Sanders and Hillary Clinton. And over the past 24 hours I’ve had a strong sense of déjà vu.

Friday night, while Sanders was stuck in DC as the impeachment trial against President Donald Trump entered its final days, his campaign threw a concert and rally with surrogates in the Des Moines suburb of Clive, headlined by Justin Vernon, the Midwest indie-rock icon better known as Bon Iver. (Vampire Weekend is set to play Saturday night in Cedar Rapids.) Vernon played his mournful hits, and closed with a rousing rendition of Bob Dylan’s classic “The Times They Are a-Changin’.”

From Bernie’s rally outside Des Moines last night, @BonIver also did a stellar cover of The Times They Are a-Changin’ to close his set pic.twitter.com/QuAETEaqQl

But before the music, there was a heavy emphasis from his camp on recriminations against perceived slights against Sanders.

Earlier in the day, the Democratic National Committee had announced it was changing the rules governing access to an upcoming presidential debate, dropping the requirement that candidates surpass a minimum number of contributors—a move clearly designed to allow former New York City mayor, billionaire, and self-funder Michael Bloomberg to make the stage. Sanders’ campaign adviser and his 2016 campaign manager Jeff Weaver quickly blasted the shift.

Jeff Weaver, a senior adviser for Bernie Sanders, said it would be “wrong” to change rules that would “accommodate" Bloomberg.

“Now, at this late hour, to change the rules to accommodate a billionaire who wants to buy his way into the party would be unconscionable." https://t.co/XoZKem7hSN

Later in the evening, a panel of House members who have endorsed Sanders—Reps. Pramila Jayapal, Ilhan Omar, and Rashida Tlaib—took the stage, subbing in for the missing senator. When the moderator made reference to Hillary Clinton, the audience let out a smattering of boos. Beyond general resentment lingering from 2016, there was fresh reason Sanders supporters would feel irked by his ex-opponent. Earlier in the day, a podcast interview came out wherein Clinton yet again ascribed some of her defeat to Trump to Sanders and his supporters. “All the way up until the end, a lot of people highly identified with his campaign were urging people to vote third party, urging people not to vote,” she said.

“Bernie Sanders might be the next president of the United States. Oooh, they’re so upset!”

Clinton’s attacks on Sanders offer a staggering contrast to how she handled her 2008 campaign against Barack Obama and the aftermath of her primary defeat. Over the course of that contest, her surrogates spread photos of Obama in traditional African clothes in a clear race-baiting attack and went on TV to call him a drug user unfit for the presidency. When it was growing clear that Obama was likely to win the nomination, Clinton’s campaign picked a Hail Mary fight at the DNC’s rules committee to seat contested delegates who backed her. Then a cohort of diehard Clinton stans organized as PUMAs—standing for Party Unity, My Ass—and while Clinton expressed general disapproval, she didn’t exactly expel all of them from polite Democratic circles. While Obama and Clinton patched things up enough that she became his Secretary of State, the first fundraiser she appeared at after leaving his administration in 2014 was hosted by leading PUMA Lady Lynn Forester de Rothschild.

When the boos piped up in Clive, the moderator tried to tamp down the sentiment, but Tlaib wasn’t having it. “You all know I can’t be quiet, we’re going to boo,” Tlaib said, egging on the crowd. “That’s alright. The haters will shut up on Monday when we win.”

But by the next morning, as the sun popped out over Iowa for the first time in days, Tlaib had expressed regret about her comments on Twitter. When Sanders, taking advantage of a weekend break from impeachment attendance, stumped at a rally at Simpson College in Indianola, Omar’s remarks offered only general references to attacks on Sanders. “The attacks on Bernie have become more and more desperate,” she said. While Jayapal was also there, Tlaib wasn’t, though she hadn’t been on the event’s schedule before the boos.

When Sanders himself took the mic, he went out of his way to be deferential to his opponents in a way that gently pushed back at Clinton. “Let me say this so there is no misunderstanding, and I believe I speak for all of the other Democrats competing in this primary. Certainly, I hope that we’re going to win, but if we do not win, we will support the winner and I know that every other candidate will do the same,” he said. “We are united in understanding that we must defeat Donald Trump.”

Given his newly found frontrunner status in the state, and the fact that impeachment has limited opportunities to see him in Iowa, the event was overflowing with members of the national media. After it wrapped, I spotted an old roommate of mine’s mom (both of them are from Iowa) who I knew was planning to caucus for Warren. I scurried over to get her take on Bernie, but New York Times podcaster Michael Barbaro beat me to her.